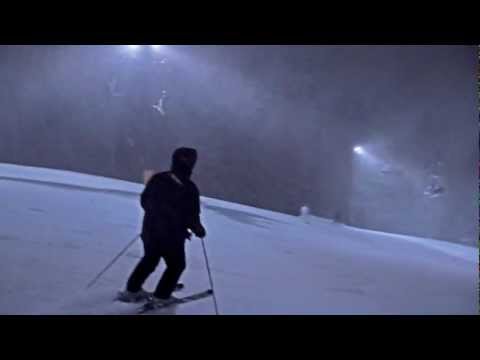 I thought I would change things up a bit (I am itching to go skiing again this season!!).  Hope you like it.

It was very dark and extremely windy that night!  Watch this eerie dark trip down a run at Brighton Ski Resort in Utah. Windy like a blizzard. That’s my dad skiing ahead – I used my tripod as a stabilizer.

~——————————————————————————————————~
H4n audio spruced up with Premiere’s compressor. The H4n did well with the Redhead Windscreen. It was very, very windy out (the video doesn’t do it justice) – yet the Redhead really held up. Snow was piling up in my lens hood, and the Redhead was CAKED in white flakes. Later, I shook it off and let it air dry. I thought for sure it would get ‘matted’, but it nearly returned to its original fuzziness after it dried. redheadwindscreens.com

I shot in these blizzard conditions with my 7D, Canon 17-85mm IS lens, Olympus Zuiko f1.8 50mm manual lens, H4n, and Redhead windscreen for approximately an hour. During that time, I changed lenses in the snow and the 7D had no problems. The LCD screens on both the 7D and H4n were ghosting, but were still fully functional. The temperature was around 20º.

When Michael's not working on a client project, he's either spending time with his wife and children or woodworking. Currently the Owner at DeVowe Photography - a commercial photography & video production business located in Minnesota. If you find an article or post interesting, feel free to leave a comment – We would love to hear from you!